The original statue of Bethlehem (a wooden sculpture gifted in 1921 by the "Casa Viuda de Reixach", of Olot - Spain) first time has left the Shrine to be venerated in the Shrine of "Our Lady of Grace" in San Giovanni Rotondo.

According to the words of the guardian of the monastery of the Friars Minor of Bethlehem, father Jerzy Kraj, also rector of the Shrine, this is the first pilgrimage of the Little Child Jesus from when, on February 25th, 1921, first arrived to Jesus' native town.
The idea of this initiative was born during a pilgrimage to Bethlehem guided last October by the rector of the shrine of San Giovanni Rotondo, Fr. Francesco Dileo, in memory of the profound devotion of Padre Pio of Pietrelcina for 'the divine Infant', as he used to call Him.
The little Baby Jesus has arrived to San Giovanni Rotondo on January 28th by helicopter to be welcomed by the local Capuchin Friary, by some members of the Town Council and by the Organizing Committee. Soon after, it reached the Main Church of the town dedicated to "Saint Leonard, Abbot", where it received the welcome by the several Parish communities and the faithful. At the end of the welcome ceremony it was brought, by a Torchlight procession, with a brief stop in front of the City Hall for the mayor's salute, Gennaro Giuliani, towards the Shrine of "Our Lady of Grace", where father Jerzy presided The Eucharistic Celebration at 5,30 P.M.
During the following days all the local parish communities and schools will make their own pilgrimage.
On February 2nd, Day of the Consecrated Life, Msgr. Michele Castoro, archbishop of Manfredonia - Vieste - San Giovanni Rotondo Diocese, general director of the Prayer Groups of Padre Pio and president of the Hospital "Home for the Relief of Suffering" will preside the evening Holy Mass.
According to the plan (published on the web site www.santuariopadrepio.it) the Little Child Jesus will go out from "Our Lady of Grace" Shrine only on two occasions: on the evening of January 31st, when the statue will visit the Cloistered Convent of the Poor Clares, and on the evening of February 3rd when it will be carried to the "Home for the Relief of Suffering". On February 4th, in the morning, before to go back to the Monastery, the statue will visit the Pediatric Oncology wing, named after John Paul II.

After a farewell ceremony which will follow the evening Eucharist Celebration of February 6th, the sacred statue, together with a delegation of San Giovanni Rotondo, will reach Rome, from where it will go back to Bethlehem on February 7th.

(translation of the official text of the press officer Stefano Campanella) 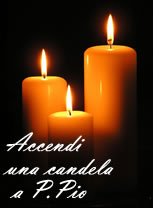 Light a candle to
Padre Pio

Pilgrimages Office is situated on the square of the church “St…